What causes the almost annual event where winds carrying dust from the Sahara Desert in Northern Africa create a cloud that ends up in the Gulf of Mexico drowning Houston Texas in a cloud of dust?

Nasa officials have reported that over 182 Million tons of dust leave Africa every year, this amount varies depending on the rainfall south of the Sahara Desert. However, this cloud is large enough NASA can monitor it from space. 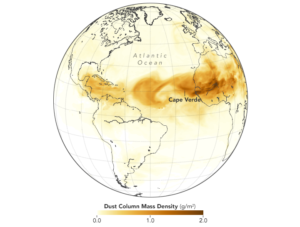 Winds typically blow from east to west- the Trade Winds is what most know them by. The Trade Winds carry the dust some 3,000 miles across the Atlantic Ocean into the Gulf of Mexico.

The dust has some benefits that include bringing phosphorus which is very good for plants, as well as keeping hurricane development minimized. These annual dust storms help to build beaches in the Caribbean and fertilize soils in the Amazon. 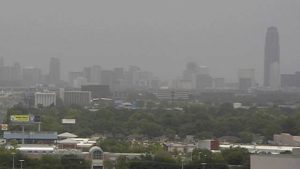 Some of the negative impacts of the dust are decreased air quality, breathing problems and heightened sensitivities to allergy sufferers. Some research shows this may also contribute to Coral Bleaching.

The reason that these dust clouds can minimize hurricane activity is due to the fact that the dry air mass essentially draws the moisture out of otherwise potentially devastating storm systems that develop over the ocean.

This year the dust formations are made up of particularly thick plumes that are traveling across Texas. News reports urge that time outside is limited and that pet owners also minimize the exposure of dust through the weekend.