What is Plastic Really Doing to Our Ocean?

In 2015, a study was released saying that our ocean contains over 150 million tons of plastic waste in our ocean and we are adding 8 million tons more every year. If you are in the water often then you will know it isn’t too rare to find a plastic bag or deflated balloon floating around in our ocean. How dangerous really is all of the trash floating around in our ocean? The pollution in our ocean is responsible for the death of multiple species of marine life and is being broken down into smaller and smaller fragments that are being digested by marine life. 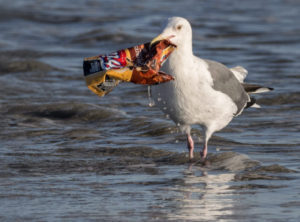 A study by the Ellen McArthur Foundation has estimated that if we don’t begin to implement methods of cleaning our ocean then by 2050 there will be more plastic in the ocean than fish. There are 2 ways that this plastic can harm a fish. First, the fish could get the plastic lodged into their tissue. A lot of the times this results in heavy impairment of the fish or death. The second way is through this plastic entering the food web. Plastic particles will never biodegrade, but being exposed to the elements can break down the plastic so that it gets broken into microscopic pieces of plastic. These microscopic pieces of plastic are mistaken for food by fish introducing the toxic material into the food chain. As the plastic moves up the food chain, it begins to rise in concentration because the further up the food chain the fish require more nutrients which is also exposing them to more plastic. Through this cycle, plastic will find its way onto our plate. It is shown in studies that over a quarter of fish in California’s and Indonesia’s market contain plastic microfibers in their stomach lining.

The Ocean Conservancy states that almost 9 out of 10 pieces of plastic they collect in the ocean is food packaging or plastic utensils. We as humans need to start properly disposing of our plastic and making it more eco-friendly altogether. Only about 14% of plastic is made to be recyclable, over a third of our plastic does not even make it into landfills, but instead clutters our street and towns as litter finding its way of out ocean and onto our plates. Help me spread the word as to how much damage plastic is actually causing to our ocean. We need to change something now or soon enough it will be too late to reverse the damage we have already done to our oceans.

This article was originally posted by our friends at Seas Lyfe. You can find the original article here.